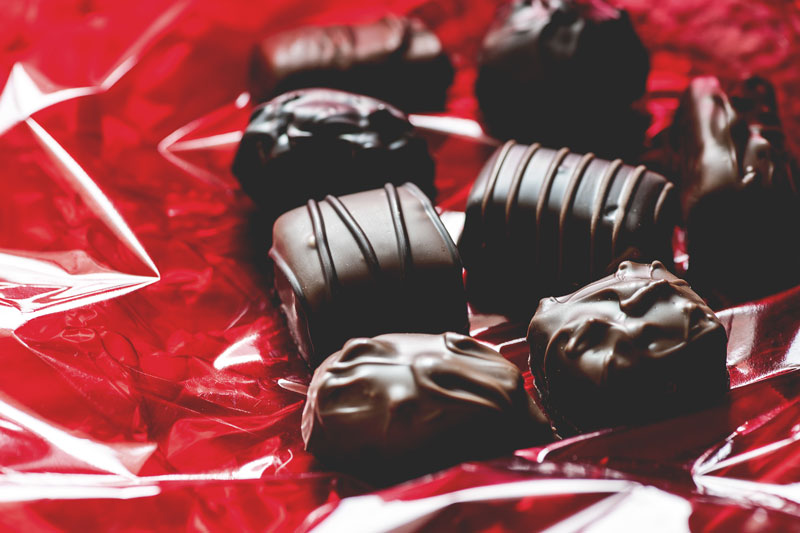 14 Feb The Wonderful, But Dark Side of Chocolate

If anything can tantalize your taste-buds on Valentine’s Day, it’s likely chocolate! Let’s face it…most of us love chocolate. In fact, stores in the United States sell more than 58 million pounds of chocolate candy the week before Valentine’s Day each year.

Retailers line shelves with pretty red, heart-shaped candy boxes in anticipation of gift shoppers. Most of the lovebirds aren’t exactly early-birds. Rather, the biggest yearly sales day for chocolate is February 13. The day prior to Valentine’s is such a mad grab-and-go that many grocery stores move chocolate to the front of the store to remind buyers to take home this greatly-anticipated gift.

Choco-statisticians tell us that Americans eat an average of 11.5 pounds of chocolate each year. (Some swear they could eat that much in a single setting!) Chocolate has become even more popular the past several years because we see the words “dark chocolate” emblazoned at the top of most healthy brain food lists. But before you stop reading, give into a craving for chocolate, and race to the cabinet for a Godiva chocolate candy bar, perhaps you need a little choco-education.

Who Said Anything About Chocolate Candy Being Healthy for You?

Don’t get mad at me when you read what comes next, but I have to be truthful. The health benefits derived from chocolate and chocolate candy are not the same thing. Gulp!

Chocolate can still be thrilling to eat, delicious, and healthy, but let’s get a few things straightened out.

First, chocolate—a derivative of the cacao bean—is most healthy in its natural, minimally-processed state. In that condition, the natural bean contains a veritable treasure trove of blissful mood boosters and brain enhancers. Second, chocolate is also loaded with amino acids and many other beneficial vitamins and nutrients that people have enjoyed for centuries. Third, chocolate had some qualities that had nothing to do with good taste or simple nutrition.

The Aztecs believed chocolate had aphrodisiac qualities that invigorated men and made women less inhibited. So when it was first introduced to Europeans later, it’s no wonder that chocolate became the ideal gift for a man to bestow on a beloved one. Are you getting the connection between Valentine’s Day and chocolate yet?

Somewhere along the way, however, healthy chocolate began to run with the wrong crowd. When the wondrous cacao beans first made their way into European gastronomic cooking circles in the 17th century, sophisticated culinary chefs realized that the pure cocoa derived from the beans was even more luscious when it was combined with loads of sugar, milk, and other sundry flavorings. When they added emulsifiers to stabilize the chocolate, the chefs could easily form it into elegant, chic truffles that high society found simply splendid.

Can you guess the rest of chocolate’s past life story? Unfortunately, all the boiling, refining and alkalization stripped the healthy elements right out of the amazing beans. Over time, people’s tastes for authentic, natural dark chocolate morphed. People insisted that their chocolate be sweet and milky. So the percentage of somewhat bitter cocoa content decreased…right along with the health benefits the natural beans provided.

Making A Case For Moving to the “Dark Side”

Our taste buds today hardly prefer dark chocolate or recognize it’s value because it tastes slightly bitter to palates that crave oodles of sugar, caramel, and mocha chocolate drinks smothered in whipped cream, and drizzled with caramel. But let’s consider the benefits of moving to the dark side to satisfy our chocolate desires and live healthier.

This change may require you to engage in some mind-over-matter thinking. Let’s alter our mindset now and think how much better it is to try to adapt to our chocolate stirred but not shaken mindset…so-to-speak. 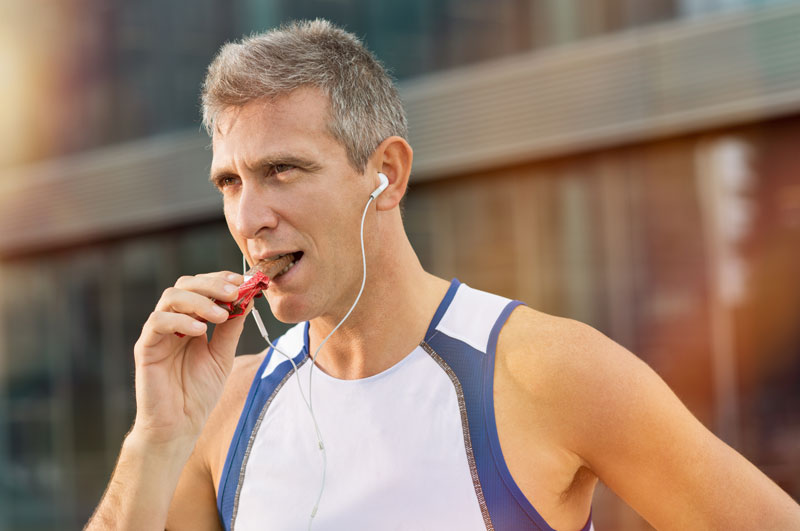 So… Should I Walk Or Run to Purchase Some Healthy Dark Chocolate?

Before you go on a choco-crazy dark chocolate binge, it’s helpful to read the few suggestions below.. Note that this healthy dark chocolate shopping adventure is a little more complex than deciding between a Snicker’s Bar or a Reese’s Peanut Butter Cup. While such candy bars may come in dark chocolate options, turn them over and observe the not-so-healthful benefits crammed inside the treat!

If you want the health-giving properties of dark chocolate, look first for the words “cacao” and “cocoa” on the wrapper. (Cacao is the name of the bean, and cocoa refers to the processed product.)

Then look for a number followed with a percent symbol (usually on the front of the wrapper). This percentage indicates the total percentage of product derived from the cocoa bean. For example, 70% on a wrapper is a good place to start if you want the maximum health benefits. But, if the bitterness in this amount doesn’t set well with your taste buds, start somewhere around 50% and try working your way up.

Dark chocolate, even without all the sugary additives remains a high fat, high calorie food. For example, a single bar of dark chocolate without all the additives can easily contain 400 calories. Most nutritionists suggest that you need only eat about 3.5 ounces per day to get the needed health benefits.

Even if you prefer your chocolate sweet and blended with caramel or other fabulous flavors, you can adjust over time. Do what I did… Just visualize the dark chocolate fueling your brain with high octane that keeps it performing in high gear. Imagine every prized bit of dark chocolate as a beloved little “brain-boosting bon-bon.”

Author of Octane for the Brain, Jeanie McKay, is a sought-after certified Life Transitions and Leadership Success coach, keynote speaker, and workshop facilitator with over 20 years experience empowering others to live their best lives. Jeanie is the Founder of MindZone LLC "Where the science of the brain meets the art of being human". Jeanie's most popular programs for "Generation Age-less" include Octane for the Brain: Rock Your 50s and Beyond... Ignite! Energy Dynamics, and Master-Minds for Health and Well-Being.